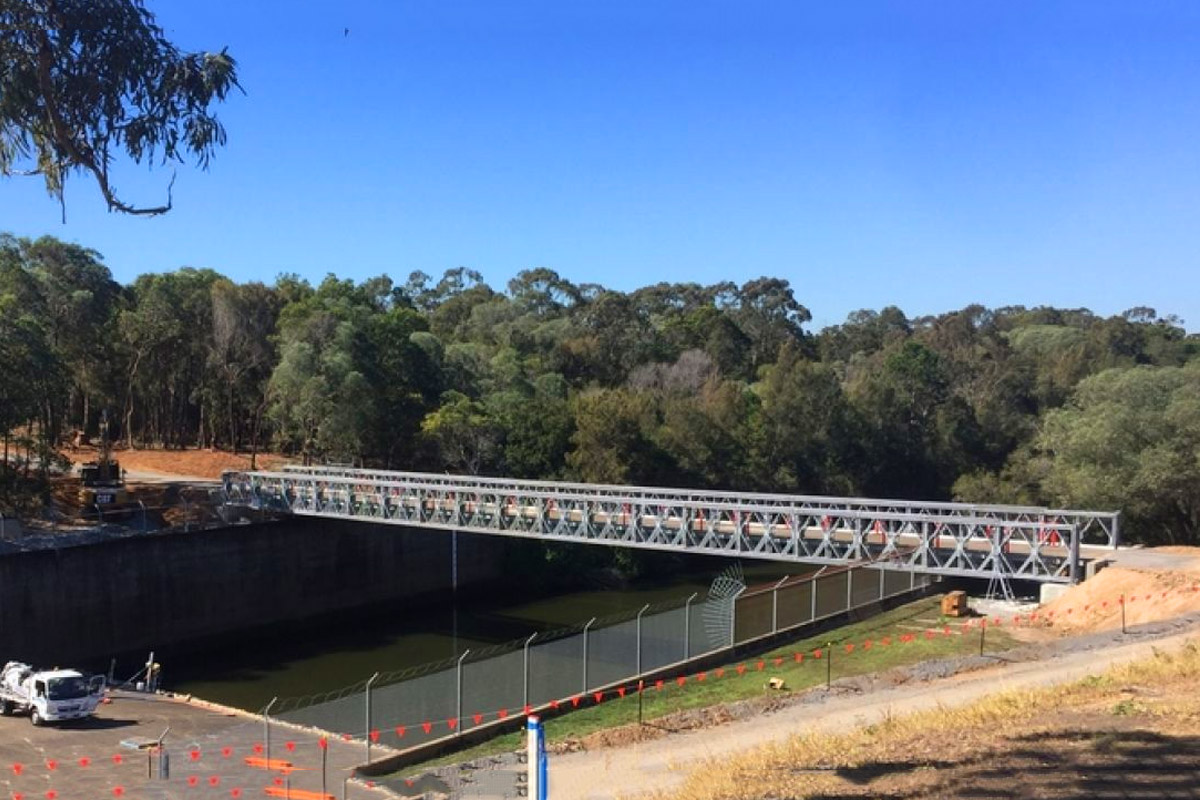 Leslie Harrison Dam, near Capalaba in South East Queensland, was identified for upgrade in order to meet Dam Safety Management Guidelines.  Mabey Australia (Mabey) was approached by Seqwater, the statutory authority responsible for the dam, to provide a temporary access route for the project’s construction traffic.  Seqwater and their preferred construction partner, Fulton Hogan, wanted a site access solution that removed heavy construction traffic from the streets of a neighbouring residential suburb.

Mabey presented a temporary bridge hire solution with access via a maintenance road that passes just two residential properties as an alternative to the existing site access through suburban streets. Mabey educated Seqwater and Fulton Hogan on the benefits of our Compact 200 steel panel bridging system. Our solution was to design a single span, 55m, 4.2m wide single lane bridge structure over the dam spillway that could accommodate construction traffic with loads up to 60t, including truck and dog earthmovers and other heavy construction vehicles.  This was a straightforward solution for C200’s capability and Fulton Hogan opted to install based on Mabey’s assembly methodology.

Fulton Hogan designed and constructed the bridge supports prior to installation. The assembly methodology involved launching the assembled C200 bridge structure in stages across the dam spillway to utilise the bridge component weights to act as the cantilever launch counterweight.

Mabey provided expert installation training to Fulton Hogan pre-works, assembly guides, launch plans and on-site support during assembly and bridge launch.  The result was that the bridge was fully assembled and launched over the dam spillway within three weeks, creating a critical alternative access point to the project, separated from the neighbouring community.  This structure was delivered safely with no delays, incidents or unforeseen impact to the environment or project schedule.  This has been the first cantilever launched Mabey bridge performed in Australia. Well done to the team at Fulton Hogan for their efficient delivery methods and special thanks to Seqwater for their belief in our solution.

The bridge is expected to remain in place for this project until mid- 2019.